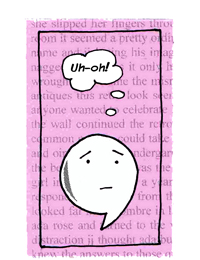 I write short comics and short prose and have seen a few of the results in print, mainly in the small press, including Sliced Quarterly (obviously) and the Psychedelic Journal. I’ve also had a (small) handful of Future Shock scripts published in 2000AD. Recently, I wanted to try to produce a strip from start to finish by myself. I’m no artist (or letterer), but the result was Punktuation (punctuation marks search for meaning in the unpublished novel they call home) and the strips are being posted several times a week at feekins.wordpress.com, on Instagram @punktuation1 and Twitter @MartinFeekins. I’m also writing a novel, a fantasy for adults in which the protagonist finds himself in the world of a fictional 1980s’ British comic – sort of Alice in Wonderland meets Whizzer and Chips. I guess most of my writing would come broadly under the heading of contemporary fantasy. I’m always open to suggestions of collaborations and whatnot.