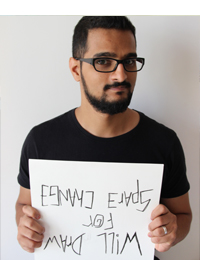 Born in the city of Bangalore (India) 1990, Rahil Mohsin was blessed with the childhood that every 90’s kid could dream of. Exposed to a variety of crazy animated shows and lots of comic books, helped him decide very early in his life to pursue a career in comic book making.

Armed with a B.A. 3D Animation (with a specialization in storyboarding, sequential art), he began conducting comic book creation workshops in schools across Bangalore. His debut comic strip, “Mom and Me”, written and illustrated by him, was for an educational magazine called “Teachers’ Plus”. He went on to create 3 graphic novels for Sufi studios namely: Wise Fool of Baghdad, Rumi1 and Rumi2.

Apart from working on spiritual and educational comic strips, Rahil loves illustrating for the sci fi, noir and horror genres. His first noir book being “The Big Sheep” with VMComics. He is a frequent collaborator / contributor to various anthologies including, Swampline Comics, Cataclysm Comics and Sliced Quarterly.

He currently lives in Bangalore with his forever roommate / wife.