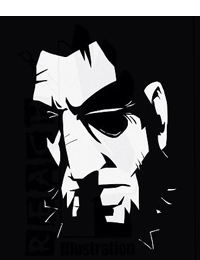 A Brief Introduction to Reach Illustration.

Born in Oxford on the 8th Jan 1973 at 2pm causing the hospital clocks (they ran on an electrical circuit) to stop; came me (true story)…

After being electrocuted on numerous occasions there after, not mentioning when aged 8, with my partner in crime watching, shutting down the market town of Witney’s electricity supply by way of an incident involving a metal bar & a set of overhead cables; I will not be offering my services as an electrician. I am however offering them as a freelance artist & illustrator.

​I’ve been drawing since I was very small & now I’m big (& getting bigger), I still cant get enough of it. Drawing that is, not food.

A little over 12 years ago I moved to one of the most beautiful places I’ve ever seen, Tintagel, on the north Cornish coast where I work & live with my ever suffering wife Cheryl & our cat Lebowski (‘not on the rug ..man’). During my fortunate time here I’ve encountered a number of opportunities ranging from paintings for clients all over the world, murals (local primary school & locally based multi national business) as well as designs for Greenpeace, TV’s Doc Martin , to illustrations for a childrens book ‘Pigs might surf’, a book called ‘The X Tractor’ by Peter Spencer (former sky news political corespondent) & I am currently working on a couple of comics due for release in the summer 2016.

With a huge leaning towards the world of comics & a fascination with everything black & white I have recently completed comics for both Madius comics, Papercuts & Inkstains #2 which has made the long-list of this years British Comic Awards & Fly comics, Timeworn Tales of torment & terror (both available at Leeds Thought bubble comic con next month) as well as passing the London Art Collage Sci-Fi & Fantasy illustration course with a distinction. It was off the back of this course that I received the opportunity to enter a competition for a poster design for the Leicester Square theater’s production of the Birds in which my design was chosen along with another. I also have personal projects at varying stages coming dreckly! So if you require anything from Logo designs to huge murals, from comics & book illustrations to graphic novels, feel free to contact me & I will get back to you…as long as you don’t need any rewiring done.