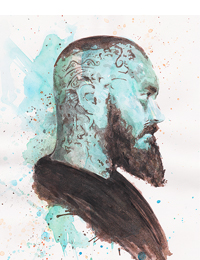 Sam Bentley was born in Stoke-on-Trent, England in 1993, where he still lives and works. Sam works in both traditional and modern art mediums, and often combined each medium in each art piece.

He has been drawing since a very early age and decided to pursue a career in comic book art in 2012. Since this decision, he draws as often as possible and has improved his skills to a professional level. Sam continues to draw every day.

Graduating from the University of Derby in 2015, with a first class honours degree in commercial photography, it informs his use of research, composition, lighting and colour in each of his artworks.

Sam is motivated in his drawing by all of the comic books which he both reads and collects, both modern and older books. Sam is inspired particularly by artists and creators such as Francis Manapul, Alex Ross, Jae Lee, Todd Macfarlane and Richard Isanove.

Sam has worked for several clients, producing covers and sequential art for independent comic books, as well as ‘pin up’ character commissions. Sam is also currently producing his own comic book ‘Illicitus’ and has a full creative team involved in the production.

In 2014, Sam was selected as one of 13 finalists in high profile comic creator Todd Macfarlane’s ‘Lucky 13’ fan art contest.This work was subsequently included in the 250th issue of the Spawn Comic book.

As of September 2016, Sam has had several comic books released, in particular 2 issues of COGNITION. Sam’s work has also appeared in magazines, and is currently working on a graphic novel.