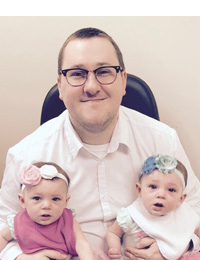 I’ve always enjoyed expressing myself through words, beginning with poetry and short stories from a young age. As time went on, I reached higher and worked on a novel and now the comic medium. My debut comic, ‘Closer,’ will be completed and released in the spring of 2017 after a successful Kickstarter campaign in February. I am also working on an abstract comic called Dreamscape.

I live with my wife Kylie and our twin daughters Amelia and Elaine, which I have been using as characters in a daily comic called CÜTE.