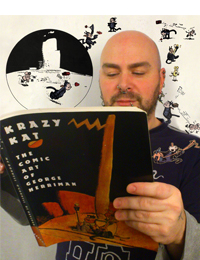 An utterly unremarkable and impecunious artist (pinched that from Wodehouse) of no particular talent and not very much ambition, Bee Bop plays bass with squatpunk band the CRiminals of EVolution and spends his days wishing he didn’t have to waste time on his monotonously moronic day-job when he’d rather be drawing strip cartoons and writing scripts; he further “wastes” his time being father to three charming oddballs and husband to a goth witch. He currently resides on the British south coast in a small town called Bognor Regis (which is Latin for Royal Toilet).

The Elevations & Depressions of a Local Radio Presenter – Issue #1