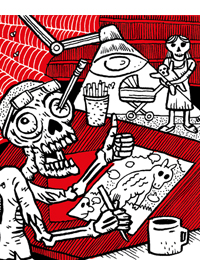 Born in 1983 in Puck. At bedtime, my father read me comic books from the National Publishing Agency, and mother didn’t mind (save for Szninkiel, which they hid). The first comic book that I read on my own was Rod Taylor’s Friends by Jerzy Wróblewski. Then came the time for superheroes and comics from TM-Semic – a publishing house that I honored in 2013 by writing a book about it.

I Didn’t graduate in any artistic major and dropped out of Fine Arts High School to avoid “studying with hippies”, a decision I somewhat regret today, what with having problems drawing horse’s backs or generic, smiling city slickers.

I am a teacher by training, graphic designer by profession, graphic artist and comics creator by avocation – though I would very much like to take up the latter as my profession. Asked about inspiration, I’m not quite original. I’ll can list tens of names, starting with Janusz Christa, Tadeusz Baranowski, Jack Kirby, and Robert Crumb. I’ve published several comic books at my own expense. Currently working on new projects, while older stories and cartoons are appearing in ever more places.