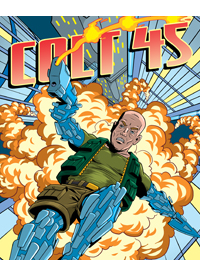 In 2012, I had a go at writing my first comic script. Flushed with success, I sent it off to one of the UK Small Press favourites – Futurequake. After several nervous months of waiting, the verdict came back… rejected. Turns out it wasn’t very good. Anyway, not one for giving up lightly, so began a busy period of research, drafting, editing and resubmissions until finally, my endeavours paid off. I had my first story published later that same year.

Since then, I’ve managed to get my comic scripts into a host of fantastic magazines, ones such as 100% Biodegradable, The Psychedelic Journal of Time Travel, Hallowscream and Zarjazz. I’ve been extremely lucky to both work with, and in some cases continue to work with, some fantastically talented artists. If I’m honest, my success has probably more to do with their skills than my own.

‘All Along The Watchtower’ by Jimi Hendrix is an absolute favourite song of mine, so much so in fact, that I named my website after it. I’d always wanted to create my own version of the story behind the lyrics and Sliced Quarterly provided the perfect platform to do just that. Dave Snell’s clever artwork and psychedelic colouring, alongside Ken Reynolds’s groovy letters have brought that very story to life with style.

My adventures into ‘hobby’ writing have continued to expand, moving from comics into short stories, flash fiction and more, and a full list of books, anthologies and magazines that contain my work can be found on my website. In September of this year, I fulfilled a long standing ambition when my first book – COLT-45 was published. (Available now from Amazon in both Kindle and Paperback format!)

All Along the Watchtower – Issue #1