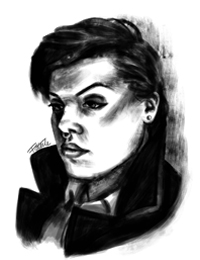 Despite her idyllic, quiet surroundings in the Herefordshire countryside, Freja Steele is a self-taught artist who loves nothing more than drawing all things sci-fi, action-packed and outlandish. Her passion for drawing, which later gave way to these loves, stemmed from finding and playing around with Photoshop on the household computer when she was a child. Growing up with Photoshop and teaching herself how to use it, the programme unsurprisingly holds a special place in her heart.

After finishing A level in 2014, Freja was invited to illustrate some short stories for the publishing company ‘Redshift Press’, which subsequently led her into the wonderful world of comics. When illustrating comics, Freja enjoys working in an array of styles and mediums, and adapts to the narrative rather than forcing the narrative to adapt to her style.

As Freja continues to explore the wonderful world of comics, she has found herself thus far illustrating for Redshift Press and Sliced Quarterly, and is currently working on projects and comics with others.