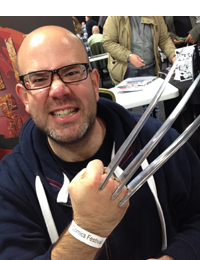 Chris Sides is a writer/creator currently living with his auntie and uncle in Bel-air.

Chris started writing about 6 years ago, partly as he found his career in teaching off-putting. He now looks after his own children full-time and writes in the hope that he can continue putting-off going back to a career in teaching.

He is the writer of DARK MATTER and WHISPERING SANDS, self-published through Redshift Press, and a spattering of short stories for such titles as Futurequake, Hallowscream, 100% Biodegradable, Markosia’s BRITISH SHOWCASE ANTHOLOGY and Dude, What? Comics’ UNLAWFUL GOOD.

He is currently the spinner of many plates, with projects on the go at Markosia, more small press anthological shenanigans and the launch of a new collective in February 2016.