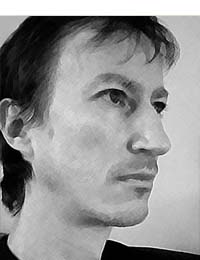 Dave is an artist living in Derbyshire, England where allegedly he is far enough from the sea to be safe from jellyfish and sharks, (although he remains unconvinced). As a young earthling Dave was consumed with the drawing of many dinosaurs and other things that went Raaaaarrrg!, although somehow this interest was never pursued academically and as such he is largely self taught.

Some years ago Dave rediscovered comics and with it, a new focus for his art. He believes that comics represent the ultimate story telling medium, where image and narrative come together in perfect harmony. He is an avid fan of 2000AD (and the Beano when no one is looking.)

Today, Dave works in the digital medium producing illustrations for books and comic strips. His work in the small press comic arena is growing rapidly and includes strips for 100% Biodegradable, Paragon, Jikon, Aaiieee! and Sliced Quarterly.

All Along the Watchtower – Issue #1